High Speed (SS) 1986 is manufactured by Williams in Illinois USA and this is a pinball that I never had played before. The Getaway: High Speed II which is the following pinball on the car chase theme I have been played several times on pinball events and competitions the last year. This pinball have similar layout as High Speed, one big difference is that it has a ramp on the left side of the playfield which goes up to a Super charger.


In September 2008 there was a advertise on the internet for a High Speed. There was no price set, instead you where asked to call and suggest a price. I call the seller and gave him a price suggestion and also get more information about the pinball machine. The flippers where not working and there was some wear on the playfield but I did not understand how much wear there was since the person not was so involved in the pinball machine. The pinball had been on a youth club and then in storage for the last three years. I asked to think over the prospect and also pictures should be sent to me. But after some hours I called back and said that I would like to see the pinball live and that I was interested to buy it. Meanwhile another price suggestion had been given close above mine but the person was not so interested so we decided that I have the first call.


Me and my son now six years old went to see the High Speed, the pinball was in a heated storage and what we could see was that there was some extensive insert wear on the playfield and some of the plastics where broken. I noticed that there was no drill holes from security bar and the backglass was in good condition - no paint loose except for a small area above the left kicker. The displays was nice and shiny - bright light. The side art of the cabinet was in pretty good shape with minor scratches and everything underneath the playfield looked visually Ok. The boards was clean without any burned parts - no acid from batteries.


I will mention that I was and looked at a Williams High Speed in the beginning of 2008 but it was in so bad condition so it could be considered as a pinball only good for spare parts - there was a lot of rust on playfield parts so it must have been held in a moisture storage for a while. It was completely dead and a lot of dust on the playfield. I left the seller with the pinball since he required to high amount of money - the playfield might have been of interest today!


When High Speed was installed at my home I started to clean and polish the legs with Autosol as I always do. My best friend Thomas helped me to carry it down into the pinball room in the basement. We had to split the topbox from the cabinet since we had bad memories from carrying the CFTBL. We reconnected the topbox and the cabinet and put in a new fuse 2,5A Slow Blow on the Flipper power board. The right flipper worked for 2-3 times before the fuse blow again. I suspected the solenoid on the upper right flipper to be bad since the EOS switch was not able to be activated when flipper was fully raised. I discovered that the solenoid was melted in the tube where the plunger move. I read that the Flipper power board also supplies (50V) to kickback one of each side of the playfield and for the kick back on the left outlane. This make sense that the bad flipper solenoid can be the bad dog since all these units do not work when testing them manually with a ball.


Have already after two days in my ownership bought new insert decals and new center target plastic, but my biggest concern for the moment is the wear on the playfield. 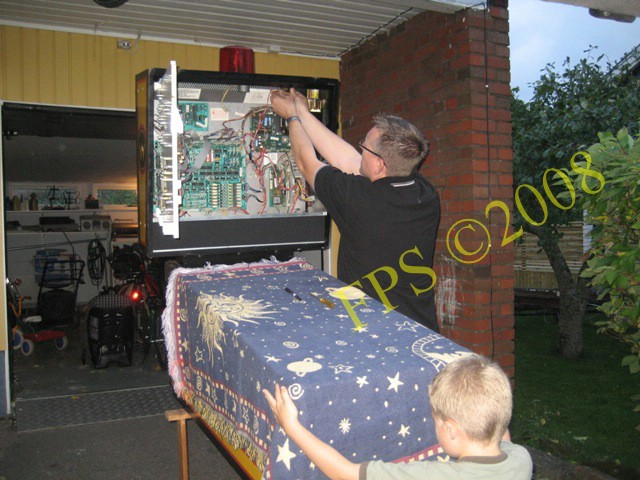 My best friend Thomas is disconnecting the cables between topbox and cabinet. Oh, My boy is really keen on to play Williams High Speed. 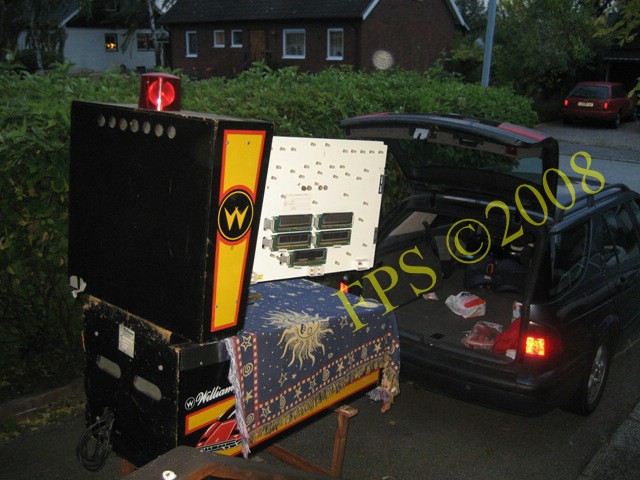 Williams High Speed is prepared to be carried in too the pinball room. 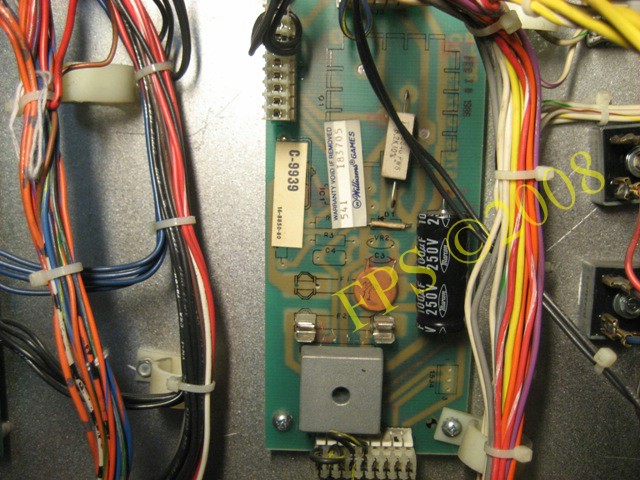 
Fuse F2 was gone when I bought the pinball and when I put in a new one the flippers worked for 2-3 times before the fuse blow. This fuse is located on the Flipper power supply board, in the topbox. 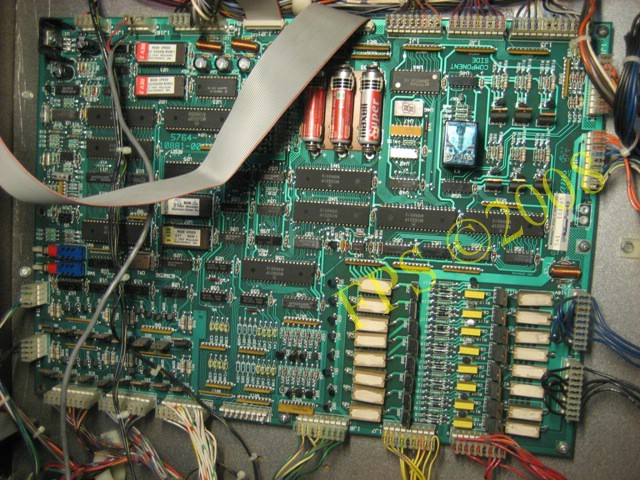 Main board, System 11 CPU board - no acid from batteries and the board Seems to be in a visually good shape. 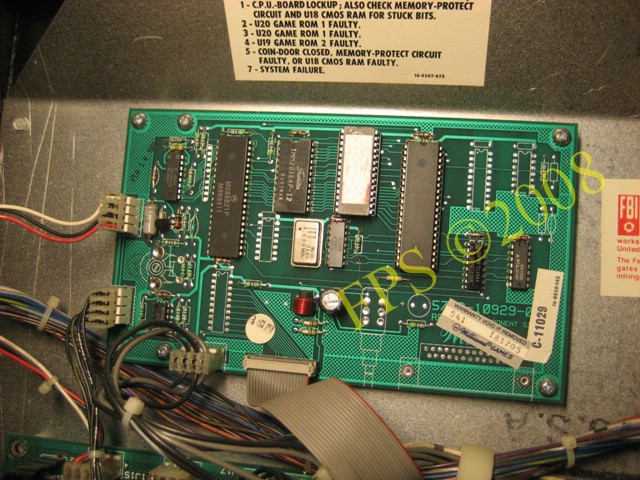 Sound board. The backgroundmusic was not working but all other sounds works perfect - as signal horn - speach. 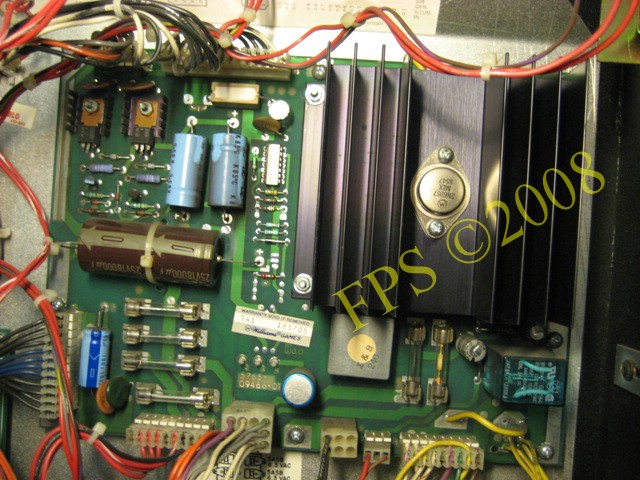 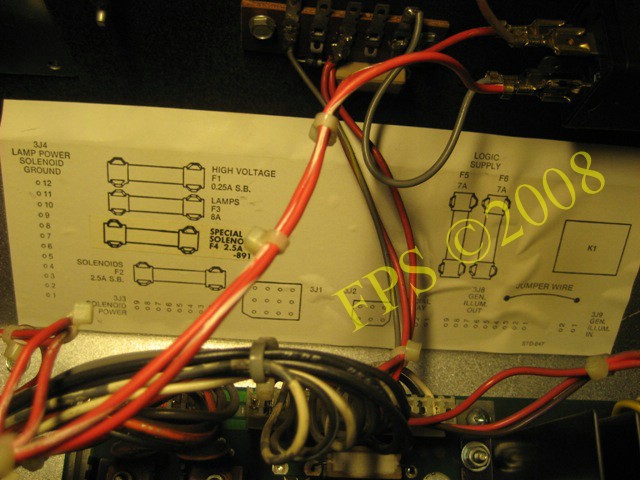 Label with a description of the fuses for Williams High Speed in the topbox. 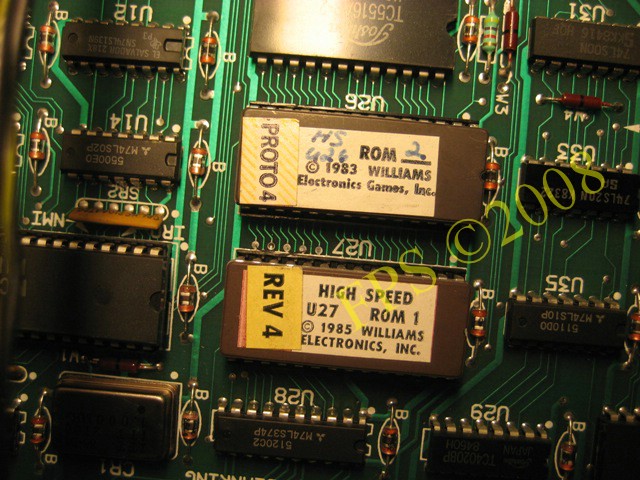 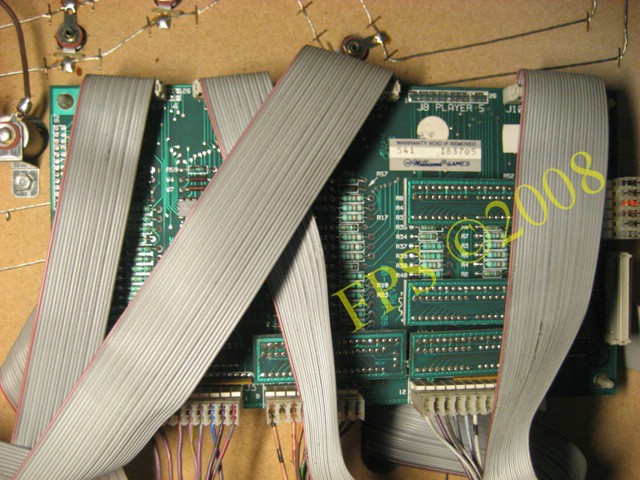 Upper part of the playfield. The red prism which shall be in the traffic light was found in the cabinet. There is a extensive insert wear in front of the center targets. 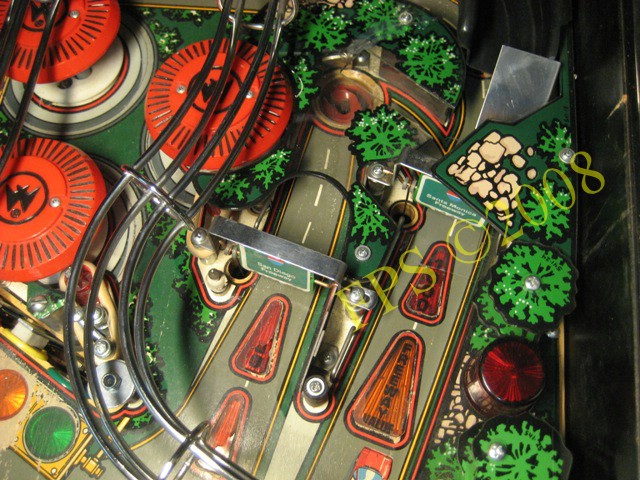 The area at kick out hole. 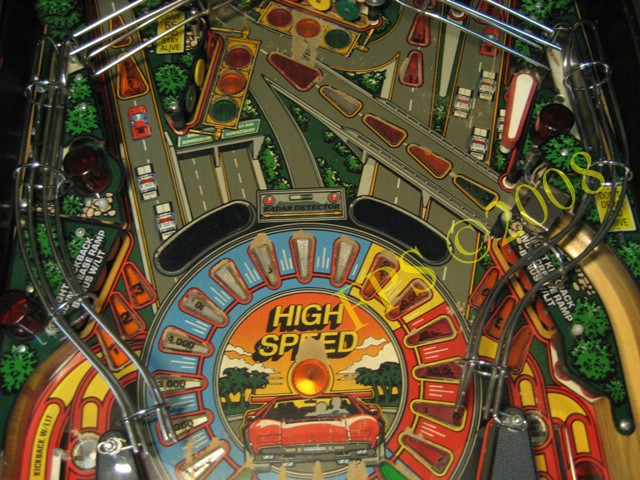 Middle part of the playfield.

Lower part of the playfield. Also here can extensive insert wear be found, today I do not know if I will manage to improve this by paint touch ups - New insert decals is ordered, some kind of improvement will be done, but what? The future have to show this. 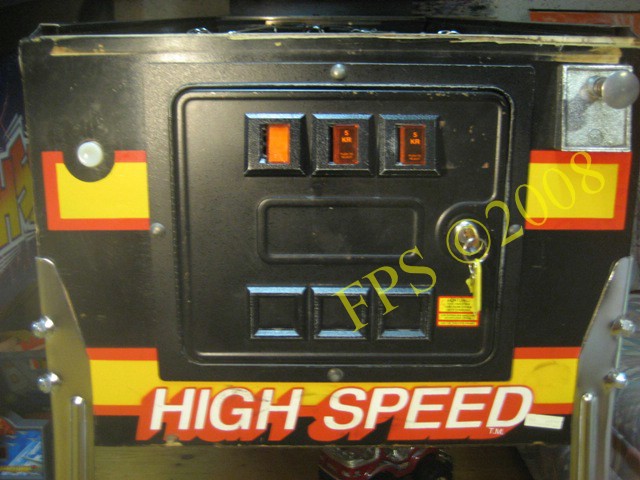 The front of the cabinet - no drill holes from security bar. 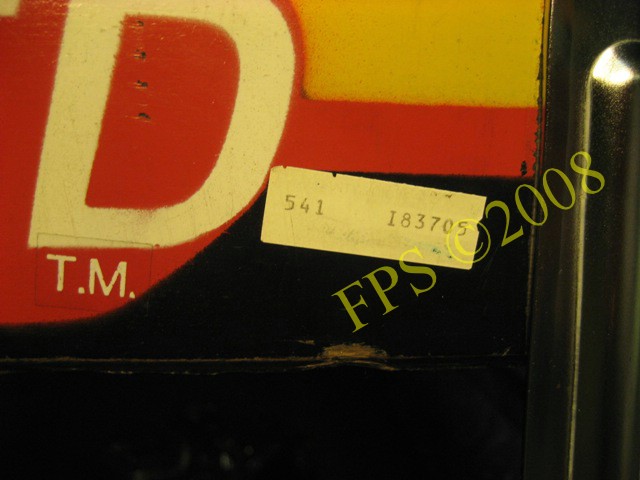 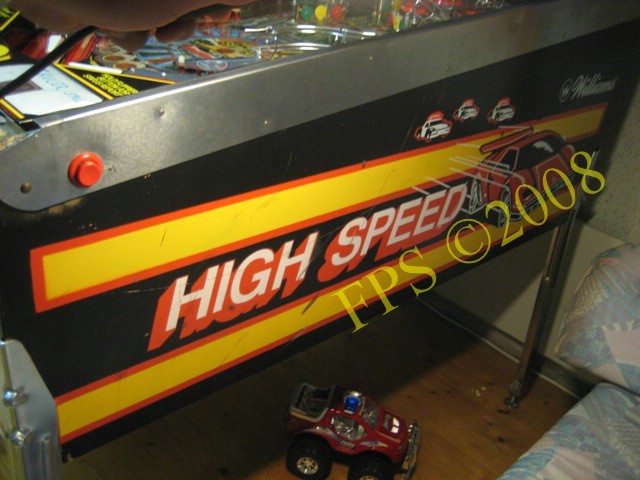 The side art on the side of the cabinet is in pretty good shape - some minor scratches. 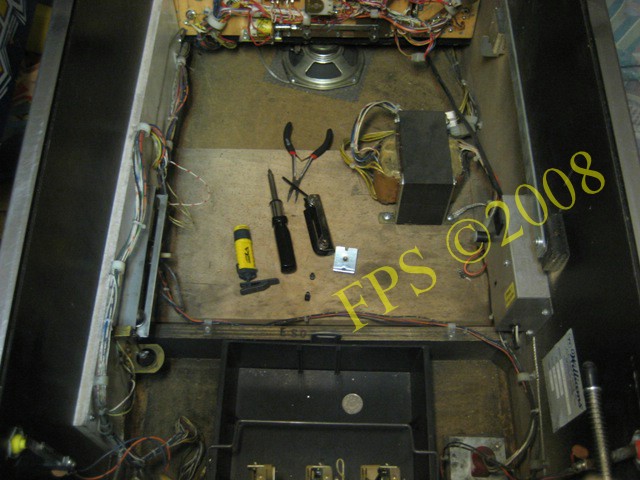 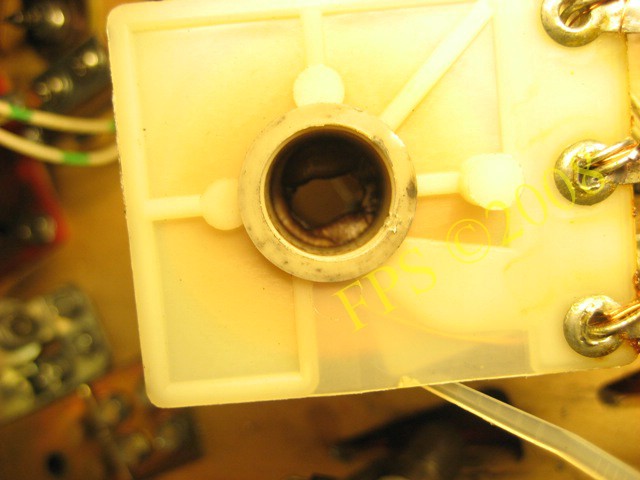 Williams High Speed is working but the ball will not be shoot out from the kickers which is situated on each side of the middle playfield, neither the kick-back on the left outlane and the flippers is working. When I manually moved the flipper linkage it was not possible to open the EOS switch. When I disassembled the flipper unit I discovered that the solenoid had melted and the plunger could not move freely inside the coil sleeve. The plunger could not reach the coil stop and that why the Switch was not able to open and cut the high voltage line. This explain why the F2 fuse on the flipper power board is broken. New coil and EOS switch is ordered and will be replaced. It will be exciting to see if everything will work after the change of parts. 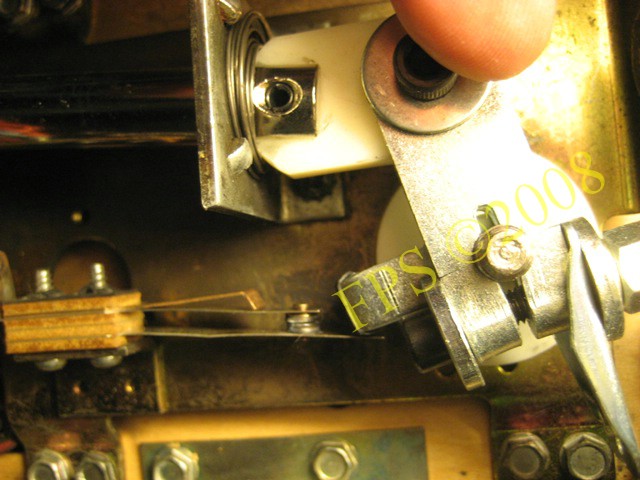 Here we can see that the flipper link can not open the EOS switch which cut the high voltage in the solenoid when fully extended. 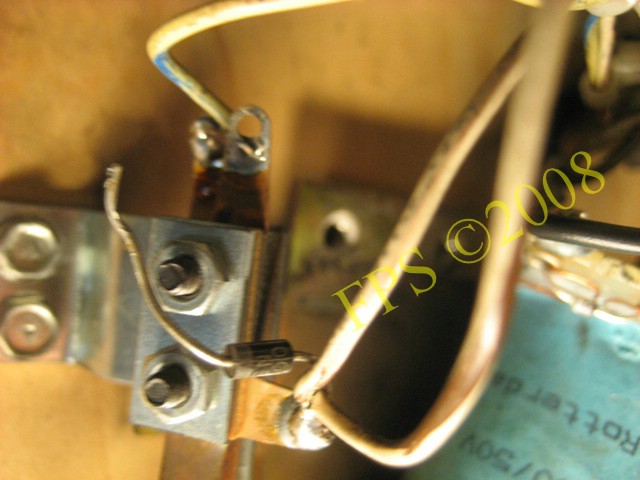 Here is the phenomena that soldering point breaks over time due to all vibrations who occurs during play. 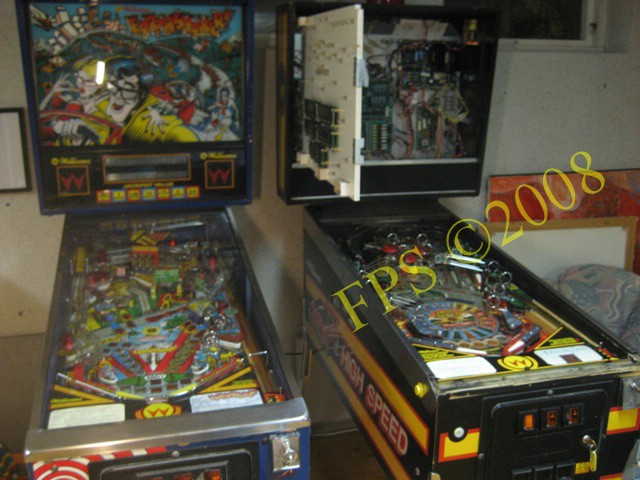 Williams High Speed will do fine together with Williams Earthshaker.