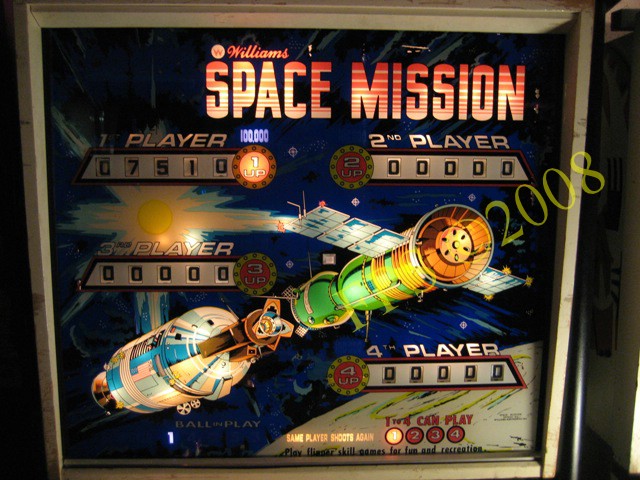 After several months of looking for a Space Mission on the internet I finally bought one. At this time there has been three Space Mission for sale since December 2006. But at that moment I was not sure if I should bought more pinball machines since I was not so into the hobby yet. By the way another pinball machine became mine in February 2007, Williams Firepower 1980, just to have a machine to play during the refurbishing of the Williams Grand Prix 1976 and mine curiosity to have a Solid State as complement to the Electro-mechanical pinball Grand Prix.


There was a advertise on the internet for a Williams Space Mission 1976 in May 2007. The price was quite high but there was possibility to negotiate the price since the pinball had been in storage for at least 10 years. The playfield was in good shape but in need of a shopping. One plastic was broken and no other visible damage. The pinball was in working condition but as said before it had been in storage for over 10 years. The pinball Space Mission was around 600 km away from my home so it was far to long to pick up over the day. One possibility to freight the pinball was by coach but the seller was skeptic if the backglass would manage the trip. Instead a possibility to achieve the pinball was raised when the seller had the way down south in Sweden to town Torsby - around 230 km from my home. We decided to meet in Torsby to change money for a pinball.


Before I had only seen a few pictures of the Space Mission sent buy the seller but made up my mind to buy the pinball since the price start to be sufficient. Looking in the mirror today the price was a little bit to high but if you really want a specific pinball you can not be sensitive.


When Space Mission was in mine possession I started to assemblies the legs and the topbox to the cabinet I thought everything looked to good. The blades on the switches was not so dirty and corroded as on the Grand Prix also the cable wiring looked correct. I connected the playfield with the topbox/cabinet.


According to the seller he had recently been playing on the Space Mission recently without problem expect from that the double bonus was missed some times when the ball is drained.


When power up the Space Mission and started a new play no ball was served but when I hit the cabinet with my hand a ball was served. I shoot away the ball but nothing was working in the top of the playfield as bumbers, roll over button, slingshots. The famous swinging target and the ball kickers at each side of the flippers worked. The flippers was not working either and the topbox General Illumination was out.


I start to be worried since I was promised that Space Mission should work according to the seller. I suspected that the jacks between the playfield/topbox/cabinet was corroded.


I made a test to manually move all players score wheels so points where added and started a new play but the player 1 and 2 score wheel was not reset but player 3 and 4 was reset and showed "00000", no ball was served in the shooter lane.


Now I thought there was bigger problems then bad jacks. I started to make a "quick and dirty" cleaning of all relays and switches on the mechanism panel in the cabinet and also cleaned the jacks.


After the cleaning I started a new and the ball was served and everything on the playfield worked and the next ball was served so the Space Mission worked again except from the double bonus counting. There was no coin mech in the coin door so no coins can be used to achieve credits and the credit unit is not setup to be on free play so I do not understand how the Space Mission is set to start a new each time the start button is pushed. This will be part of the refurbishing of the Space Mission to let it accept coins.


Before I bought Space Mission I had only seen it on pictures on the internet and a video of the Space Odyssey on the youtube.com, Space Odyssey is the two player version of Space Mission. I wanted this pinball due to the extremely beautiful backglass with the cold war era them, the space station with USA and the CCCP logos clearly visible. Space Mission will be a perfect complement to Grand Prix and will look very nice in the pinball room, both of them is from 1976 and manufactured by Williams, the playfield differs from Grand Prix since there is no inlanes and there is a kicker on each side of the flippers which shoot the ball up against a moving target, a innovation by Williams.


The history behind my Space Mission is that it has been in operative use for four years by the Swedish operator company Cherry bolagen and then been hold by an mechanic who ended at this company in the beginning of the 80´ths, private owned since 1980.


On the following pages you can follow the refurbishing of this old treasure. 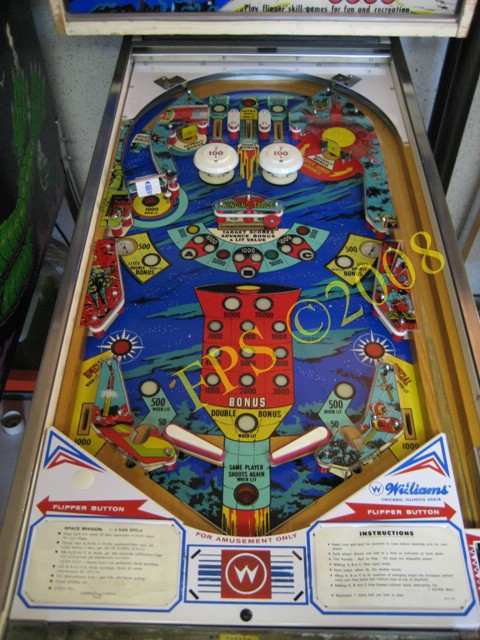