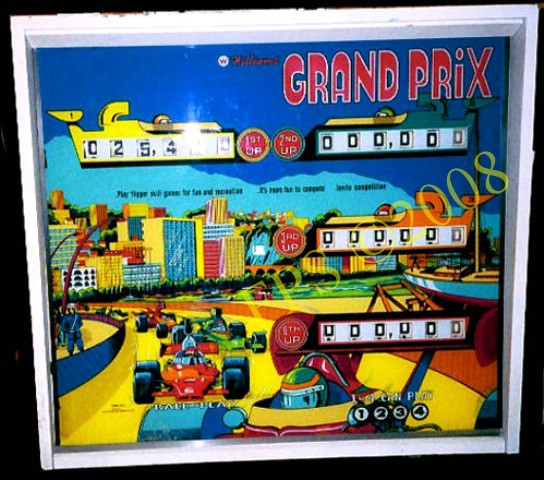 Grand Prix (EM) 1976 made by Williams in Illinois USA was the first pinball to be in my possession. The only thing that worked on the machine was the GI general illumination and the score motor made 1/2 turn when trying to start a new game. I thought it only was to replace and add some coils in the score wheels to get the machine up and running but the work with the Grand Prix came to be more extensive then I ever had thought before. When starting to look into the machine I discovered a lot of homemade electrical connections and loose wires, the fact that the mechanical parts in the game was soaked with oil and different lubrications, dirt etc. does not made me feel happier over the machine. For example the coin relay was blocked with an hoop. My heart was brooked when I thought about the machine - how will I ever manage to bring it back to live again!


The chime unit and the knocker was missing which I recognized first after I had owned the game for some weeks since mine knowledge about what is inside an electromechanical pinball was restricted. When I bought the game I did not know that these parts should be included in the machine.


The counter "Total play" located in the cabinet showed 46269 played game. But has for sure been laped several times during the years the machine has been operative by an operator.